“Inside the Brain,” a NeuroMat-supported exhibition at the University of São Paulo Museum of Veterinary Anatomy

The University of São Paulo Museum of Veterinary Anatomy will launch in the short-run the exhibition “Inside the Brain,” curated by NeuroMat investigator André Frazão Helene. The goal of the exhibition, which will be held permanently in the museum, is to stress the role of the anatomy (form) and neural activity (function) in how the brain works. The exhibition is supported by FAPESP (via NeuroMat), the University of São Paulo “Pró- Reitoria de Cultura e Extensão Universitária,” the Laboratory of Cognitive Processes, and the User Group Wikimedia in Brazil.

The exhibition displays animal and human silhouettes with their respective encephalons. This allows for easy comparisons and orients educational discussions around the impact of brain size and development.

The exhibition brings a virtual totem, which will provide interactive content for attendees. The video that opens this piece will be shown on the totem and was produced by NeuroMat scientific communicator Giulia Ebohon.

“The expectation around the exhibition ‘Inside the Brain’ relates to developing the anatomical observational and analytical skills of attendees. This exhibition is a great opportunity for a general audience and particularly for school students who come to the museum in order to learn more about organs and systems, especially the nervous system. This learning process will be enhanced by being able to compare different encephalons in animals with the same biological size,” said Maurício Candido da Silva, the administrative chief of the Museum of Veterinary Anatomy. 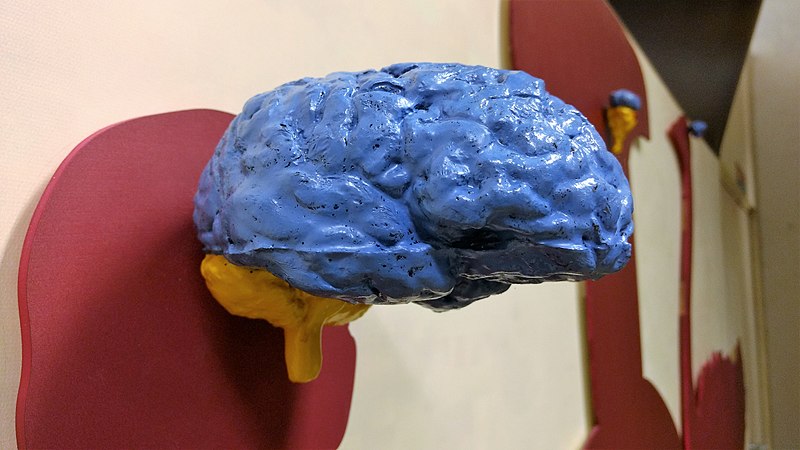 According to André Frazão Helene, the exhibition remains the by-product of rallying interests from the Laboratory of Cognitive Processes (LABCOG) —that Helene coordinates—, NeuroMat and the Museum of Veterinary Anatomy. Objects on the exhibition were initially developed to provide a comparative approach to the evolution of the nervous system and to reduce the use of living animals on experimental classes. Objects of this sort did not exist in Brazil, so they were fully developed by students at the University of São Paulo, under the supervision of Helene. These objects were then replicated, so to be used in other settings —the method to replicate these objects was patented and is now distributed by Agência USP de Inovação. When the Museum of Veterinary Anatomy signaled its interest in creating the exhibition ‘Inside the Brain,’ Helene said, the use of the encephalons that had been created seemed like an opportunity and was made part of the inception of NeuroMat’s project.

Student workers were involved in the development of the exhibition. These students from the University of São Paulo took part in creating the collection objects and designing features of the exhibition. They were also active in devising and running pilot presentations in schools and scientific meetings.

As Helene highlights, “Inside the Brain” is now part of an intense program of scientific dissemination bringing together the museum direction, NeuroMat and Wikimedia in Brazil, aiming at providing open, free access to all the pertaining museum collection. This content is now available globally and has on average around 8 million views per month.

This piece is part of NeuroMat's Newsletter #42. Read more here