NeuroMat to launch a science podcast 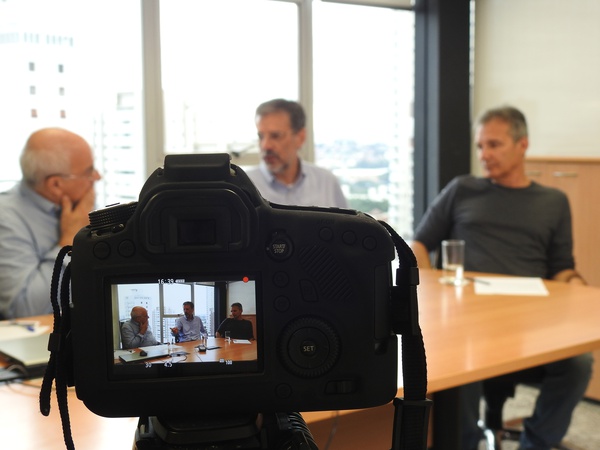 The Research, Innovation and Dissemination Center for Neuromathematics (RIDC NeuroMat) will launch in August the podcast "A Matemática do Cérebro" --in Portuguese, Mathematics of the Brain. This resource will be available on the most important podcast technologies and also hosted on its own website. The production of the podcast is led by NeuroMat director Antonio Galves and the newest member of the RIDC, Eduardo Vicente, from the University of São Paulo School of Communications and Arts.

The NeuroMat dissemination team and a graduate-level fellow will provide support and operationalize the podcast production. Artist Sara Müller has joined to website development team to work on layout and design.

NeuroMat's podcast will cover three main topics: the model for systems of spiking neurons that the research team developed; the Statistician Brain conjecture; and pertaining institutional aspects of doing research in Brazil. The overall goal is to bring public awareness on work that is being done within the NeuroMat community.

The first episode will be a special interview with Carlos Henrique de Brito Cruz, the scientific director of the São Paulo Research Foundation (FAPESP). FAPESP created the RIDC NeuroMat in 2013. Interviewers were Galves and Vicente. A set of pictures of the interview, held at FAPESP's office in June, is freely available.

To present the process by which science is produced in Brazil is the editorial line with which the topics will be covered in the NeuroMat podcast. The reasoning is that one might normally just be confronted to end products from the scientific endeavor, i.e., published articles or practical uses of discoveries, and this does not provide an understanding of how these products were a step in dynamic discussions, trials and operations.

Interviews will remain a major element in the podcast episodes. The idea is to have members of NeuroMat from different backgrounds and academic positions provide inputs on the center's research framework.

Additional content will be provided on the podcast official website. Pictures, transcripts, further readings and movies will eventually be included.