A NeuroMat project for a "self-driving" transcranial magnetic stimulation (TMS): an interview with Oswaldo Baffa Filho 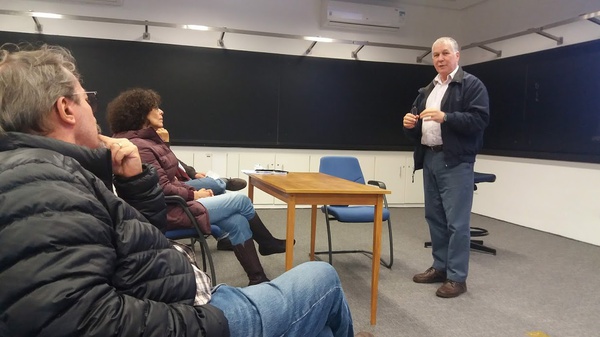 The Research, Innovation and Dissemination Center for Neuromathematics (RIDC NeuroMat) has sustained an ongoing project for the development of new strategies of transcranial magnetic stimulation (TMS). This project involves the development of several tools and equipments, and is mostly informed by basic questions on how to model brain functioning.

The project on TMS is led by NeuroMat PI Oswaldo Baffa Filho. Professor in the Department of Physics at the University of São Paulo Faculty of Philosophy, Sciences and Letters at Ribeirão Preto, Baffa Filho provides an overview on the innovation and research challenges associated to this ongoing project.

You have recently joined the NeuroMat team as a principal investigator. Could you please explain your motivations for joining the team?

We have been working with transcranial magnetic stimulation from the instrumentation side for quite some time. One of the main achievements of our group was the development of a neuronavigation system that improves the precision of the magnetic stimulation to a given area in the brain. On the other hand, NeuroMat is investigating how the brain processes information in a very fundamental way, using sophisticated statistical tools. Thus, it seems natural that a research activity that can produce data on some experimental protocols with the highest precision available would fit in the NeuroMat project having the potential to provide interesting data to be modelled. But not only that, our group will certainly benefit from the academic environment provided by NeuroMat in a win-win relationship. In summary, I am very enthusiastic about this partnership and looking forward to possible breakthroughs.

Your project in NeuroMat builds upon an ongoing line of research and innovation to map with greater precision and efficiency cortical representations. Could you provide a background and state of the art of this work?

Presently transcranial magnetic stimulation (TMS) is applied mostly using external landmark marks (fiducial marks) on the subject’s head to position the coil and deliver the stimuli. A great step forward was the development of the open source software InVesalius Neuronavigator. This software was developed in collaboration with the Renato Archer Technology Center. With its use its possible to visualize the are of the brain being stimulated and this information allows a rapid mapping of the areas of the brain. In an analogy the previous situation was like driving a car in a fog road having to rely on the marks at the curb of the road, whereas with the neuronavigator it is like driving in a sunny day with clear vision. To make this possible the TMS coil is instrumented with a positioning device as well as the subject’s head and the operator position the coils.

Now our group wants to take a great step ahead. The idea is to bring to the scene new partners. A collaborative robotic arm (cobot) and a system of cameras that can track the subject’s head. The cameras, cobot, TMS coils and Artificial Intelligence will compose a system that will work in cooperation providing a frameless stimulation of the brain. Using the same analogy as before we are moving from visual driving by an operator to self-driving!

Could you explain the general idea of your research and innovation plan in NeuroMat associated to developing a more precise robotic arm to deliver TMS? What are the expected benefits of developing a strategy with two stimulators?

As you mention we have two main goals in our research. One is the production of a closed loop system to provide precise, frameless positioning of the TMS coils to deliver stimuli to specific areas of the brain, improving precision reliability, and accuracy. This will be a milestone. The patient will seat comfortably in a chair, a set of cameras will make the identification of the landmark and give instructions to the cobot to approach the coil at a certain distance and angle and deliver the stimuli. This process will be repeated for several points allowing mapping of the brain’s function; thus, opening the possibility to ask several questions about the brain’s functioning. This project benefits from our partnership with the USP-Sao Carlos Engineering School (EESC-USP)

The other main goal is the development of a multi-locus transducer for TMS. This is a project developed in collaboration with Aalto University in Finland and aims to have at least two stimulation coils assembled together. In this way, it is possible to have an electronic control of the pulse positioning much faster than would be possible by the robotic system, that would involve mechanical movement, which is intrinsically slower. So, this second target intends to advance even more the horizon for questions to be asked, since we could provide stimuli train in the range of the millisecond.

What are expected spin-offs associated to developing the robotic arm?

This research has the potential to generate technological spin offs in many areas. The InVesalius Neuronavigator is already being extended to applications in neurosurgery on the spinal cord. Another application that is in the radar is its use in the implantation of deep electrodes in the brain. With the development of the robotic arm and the camera tracker we foresee that many groups working with TMS will be interested alloying also the creation of startup companies.

In practical terms, how will the work to develop the new strategy for TMS take place?

There is an ignition “nuts and bolts” approach, in other words the assembling of the system and initial tests that will be centered at our group. Then comes another phase that is the several tests and tailoring of the system to the needs of the group. This will require a strong interaction with the whole team in some sort of open innovation within NeuroMat.

How do you expect the interaction with other members of the NeuroMat team --mathematicians, neurobiologists, physicists, etc.-- to contribute to the work around TMS?

The interaction will be broad and deep. From very basic topics we can anticipate that having a robust, fast and precise control system to provide the self-driving TMS will face challenges that the colleagues from math and statistics would be extremely helpful. Once the system is working properly another step comes into the agenda. How to explore data  is to “ask” questions to the brain and get “answers” that could be modelled, this will require a truly multidisciplinary approach, including neurobiologists, medical doctors, physicists, mathematicians, and engineers, and will be extremely innovative.