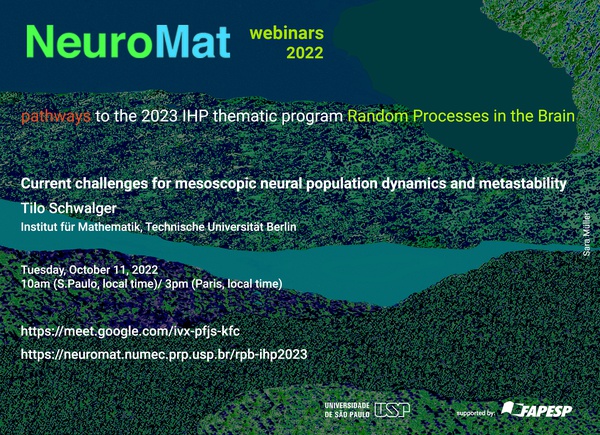 "Current challenges for mesoscopic neural population dynamics and metastability" is the sixth seminar in the series Pathways to the 2023 IHP thematic project Random Processes in the Brain.

Title: Current challenges for mesoscopic neural population dynamics and metastability
Date: Tuesday, October 11, 2022 at 10:00 GMT-3
Link: meet.google.com/ivx-pfjs-kfc
Speaker: Tilo Schwalger
Affiliation: Institut für Mathematik, Technische Universität Berlin
Abstract: Mesoscopic neuronal population dynamics deals with emergent neural activity and computations at a coarse-grained spatial scale at which fluctuations due to a finite number of neurons should not be neglected. A prime example is metastable dynamics in cortical and hippocampal circuits, in which fluctuations likely play a critical role. In this lecture, I will discuss recent advances and current challenges for mean-field descriptions of computations and metastable dynamics at the mesoscopic scale. Firstly, I will discuss fundamental differences between external noise and intrinsic "finite-size noise" in population models, and their distinct impact on metastable dynamics. Is it possible to infer the type of metastability and noise from mesoscopic population data? Secondly, I will address the question of how to treat single-neuron dynamics (e.g. refractory mechanisms, adaptation) and synaptic dynamics (e.g. short-term depression) at the level of mesoscopic populations. Is it possible to derive (low-dimensional) bottom-up mesoscopic models that link back to the microscopic properties of spiking neural networks? And thirdly, I will address the fundamental problem of heterogeneity in biological neural networks. An important source of heterogeneity is non-homogeneous network structure. The synaptic connectivity of any neural network that performs computations is structured, e.g. as a result of learning. How can mesoscopic mean-field theories, which so far assumed homogeneous (unstructured) connectivity, be generalized to heterogeneous, structured connectivity?