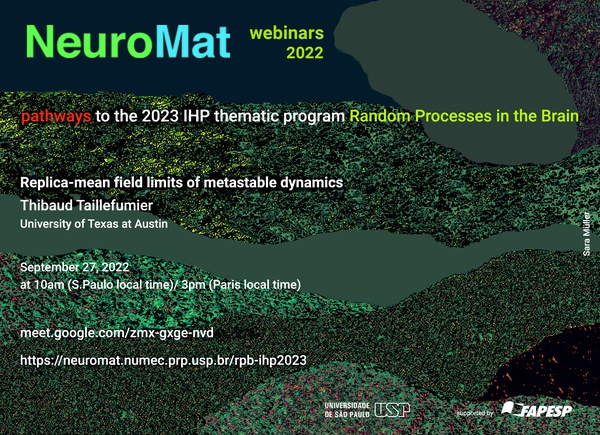 "Replica-mean field limits of metastable dynamics" is the fifth seminar in the series Pathways to the 2023 IHP thematic project Random Processes in the Brain.

Title: Replica-mean field limits of metastable dynamics
Date:Tuesday, September 27, 2022 at 10:00 GMT-3
Link: meet.google.com/zmx-gxge-nvd
Speaker: Thibaud Taillefumier
Affiliation: University of Texas at Austin
Abstract: In this talk, we propose to decipher the activity of neural networks via a “multiply and conquer” approach. This approach considers limit networks made of infinitely many replicas with the same basic neural structure. The key point is that these so-called replica-mean-field networks are in fact simplified, tractable versions of neural networks that retain important features of the finite network structure of interest. The finite size of neuronal populations and synaptic interactions is a core determinant of neural dynamics, being responsible for non-zero correlation in the spiking activity, but also for finite transition rates between metastable neural states. Theoretically, we develop our replica framework by expanding on ideas from the theory of communication networks rather than from statistical physics to establish Poissonian mean-field limits for spiking networks. Computationally, we leverage this replica approach to characterize the stationary spiking activity emerging in the replica mean-field limit via reduction to tractable functional equations. We conclude by discussing perspectives about how to predict transition rates in metastable networks from the characterization of their replica mean-field limit.