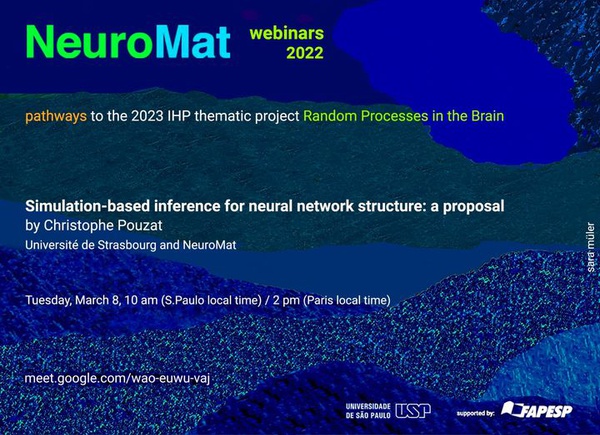 "Simulation-based inference for neural network structure: a proposal" is the first seminar in the series Pathways to the 2023 IHP thematic project Random Processes in the Brain.

Title: Simulation-based inference for neural network structure: a proposal
Date: 2022-03-08 at 10:00 GMT-3
Speaker: Christophe Pouzat
Affiliation: Université de Strasbourg
Abstract: The central issue we would like to discuss with you is the network inference both from a structural and a dynamical viewpoint. What we mean by ”network” here corresponds to a cortical column, not a whole brain. We now have, for many brain regions, a lot of anatomical/structural data. We would like to use these data when we try to infer the network underlying the observed neuronal activity (e.g., in the form of spike trains) recorded by the experimentalists. We also have many different reduced dynamical models for the neurons: some deterministic like the Hodgkin-Huxley and its reduced versions (e.g. Morris-Lecar, FitzHugh-Nagumo) and variants of integrate-and-fire models (e.g. exponential IF) and Izhikevich model; some stochastic models like stochastic integrate-and-fire models, adaptive threshold models, the Hawkes process or the Galves-Löcherbach model. These reduced models allow us to simulate reasonably large scale networks (like cortical columns). These large scale simulations require the specification of many parameters for the dynamical model, as well as for the random graph models we can propose from the known anatomical data. Several colleagues have by now used a combination of a dynamic model and of a network model with fixed parameters to generate data under the "null hypothesis" (e.g., no functional coupling between the observed neurons), leading to an empirical distribution of their statistic of interest. We think that we should now go one step further and that’s what we would like to discuss with you. Namely we would like to consider a simulation based approach for the network inference problem as is now done in many fields under various names (e.g. "Approximate Bayesian Computation" and "Simulation Based Inference"). In our view a successful implementation of these methods to our problem will require the gathering of experts from many fields: quantitative neuro-anatomy, random graphs, large scale numerical simulation of the various dynamical models, statistics and probability.